The Effects of Drought on Trace Mineral Status of Breeding Cattle

The biggest threat from drought to long-term reproduction of cows is the lack of available forage which results in her ability to rebreed. In other words, is there enough forage for her to meet nutritional requirements? Are the cows in adequate body condition? Cows with a body condition score of 4 at calving are expected to have a lower pregnancy rate or longer postpartum interval than cows with a condition score of 5. Because drought can cause lower body condition scores, ranchers may observe herds with 50-60% pregnancy rates compared to a normal of 80-90%. The following picture shows cows grazing drought impacted range in AZ. Conception rates varied between 55 and 70%. 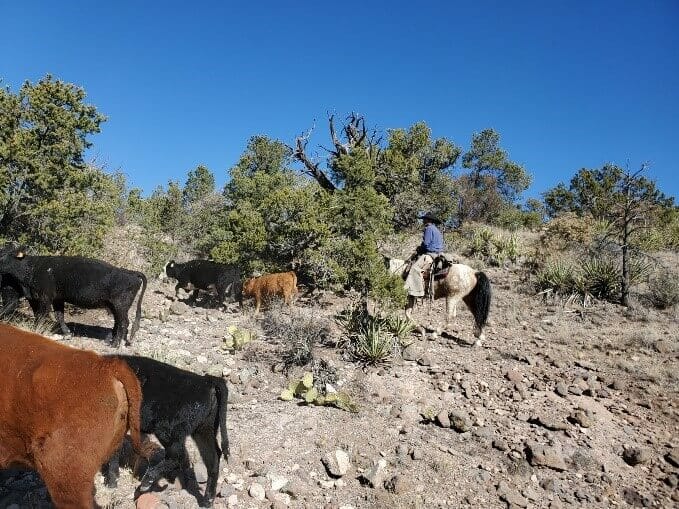 Drought-impacted forages may be low in trace minerals which can also lead to a reduced ability to cycle causing a failure to breed back and have a live healthy calf. Average mineral concentration of grasses from a MT study showed that Cu and Zn in grasses were deficient (< 6 ppm Cu) and < 21 ppm for Zn. The requirement for Cu is 10 ppm and 30 ppm for Zn. Similar results were also reported for native grasses in TX. Reproductively, a deficiency in Cu can lead to decreased conception rates, infertility, silent heats and fetal resorption. Other symptoms include: poor growth, rough hair coat, fragile bones, diarrhea, and cardiac failure. Zinc (Zn) deficient cows appear to display abnormal estrus as well as reduced fertility. Manganese (Mn) deficiency will result in impaired ovulation while a deficiency of selenium (Se) can lead to cystic ovaries and erratic, weak or silent heat periods. All four of these trace minerals can be provided by a Multimin®90 injection at critical production periods (calving, branding/prebreeding, weaning).

Theoretically this could translate into a difference of 40 lbs. of weaning weight (2 lbs./day ADG preweaning x 20 days). In another study while there was no effect on overall pregnancy rates, cows injected with trace minerals had a significant change in calving distribution. A greater proportion of cows treated with the injected trace minerals calved in the first 20 days of the calving season (77.5%) compared to the untreated controls (65%). 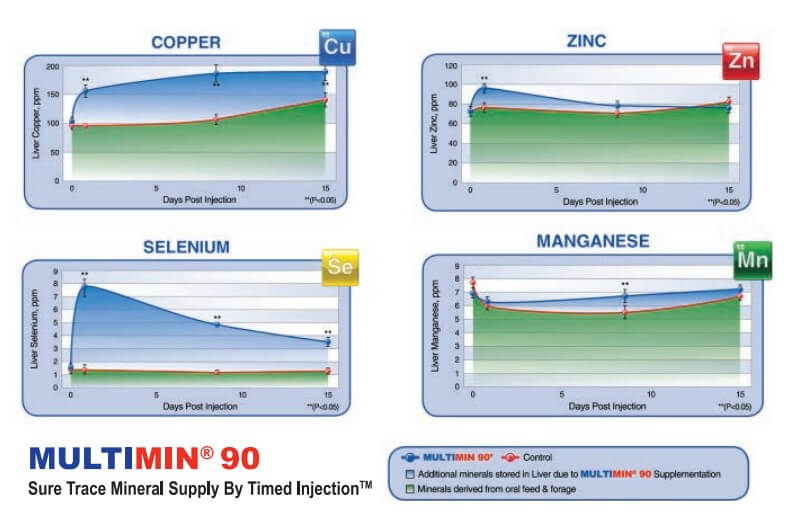 Remember, injectable trace minerals are not affected by ruminal antagonists.

Calves that were stressed due to recent weaning and shipping exhibited lowered immunity and increased disease susceptibility; therefore, an adequate supply of trace minerals is especially critical in beef cattle receiving diets for stocker cattle. Feed intake is decreased in stressed cattle and the level of certain minerals may need to be increased to compensate for the low feed intake. Furthermore, nutritional status of calves prior to weaning and shipping may greatly influence health problems shortly after shipping. Calves deficient or marginally deficient in certain trace elements are likely to be more susceptible to infectious diseases.  This is why an injection of MULTIMIN® 90 can be beneficial in helping to combat disease; especially when combined with a weaning vaccination protocol. In an interesting study from the University of Arkansas, calves were purchased from auction markets and were evaluated for morbidity and performance in a growyard for 55 days.  Calves that did not receive injectable trace minerals had a first pull rate of 87% compared to 55% for MULTIMIN® 90 treated calves. The third round of morbidity treatments showed that nontreated calves had a 32% pull rate vs. 10% pull rates for calves treated with MULTIMIN® 90.Gains were improved by .38 lbs./day and return on investment was 12 to 1 for MULTIMIN® 90 treated calves.

The use of injectable trace minerals has demonstrated an improvement in reproductive efficiency, rapid uptake by the liver, better immune function and greater return on investment.

Learn more about how MULTIMIN® 90 can support your herd in drought conditions and contact your MULTIMIN® USA Technical Sales Representative.